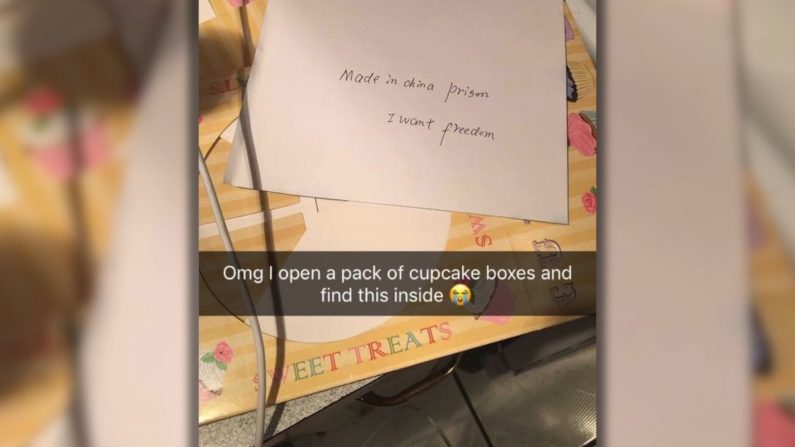 “Made in china prison. I want freedom.”

Lourdes Figueiredo, the owner of a New York bakery shop, was caught off guard opening some cake boxes one day; she saw the above words written on the back of the packing!

Because she has never seen a “Cry for Help” note on her packing box before, She took a picture of it and put it on social media just to show people what she was shocked . Lourdes’s friends all felt very surprised and  sad when saw the picture.

This is not the first “Cry for Help” note from a China labor camp. There have been several reports of such incidents.  Many of the people in China labor camps are prisoners of conscience (many are Falun Gong Practitioners) who have been illegally detained and put in camps without proper trials.

In 2002, Julie Keith (in Oregon) contacted a human rights organization after finding a “Plea for Help” inside a package of Halloween decorations she purchased at Kmart.

Yijie Zhang , a Falun Dafa practitioner from mainland China, said that she was imprisoned in a labor camp in Beijing for two years and forced to make goods for export.

The conditions of Chinese labor camp were very poor and the inmates were subjected to torture. Yijie Zhang said that she was forced to work for 15 hours a day. As a result, she lost much of her vision.

China has denied that it exports goods made in labor camps, despite evidence to the contrary. The note discovered by Figueiredo proves that labor camps are still operating in China, despite the country announcing that it had shut them down.