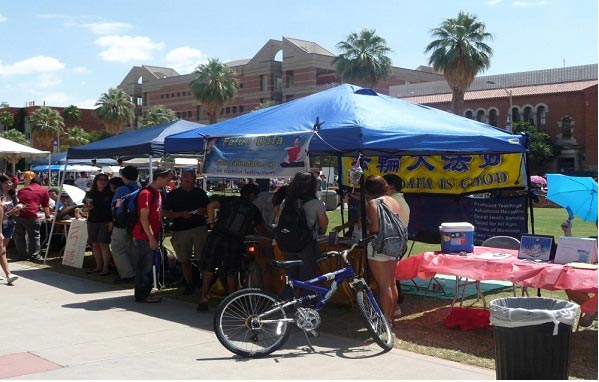 The Falun Gong Club at the University of Arizona attended the school’s fall student organization expo on September 5, 2012. The day was sunny, and the event attracted many students.

Student practitioners set up their booth early in the morning, and soon attracted groups of students. They told students what Falun Dafa is, as well as the principles and benefits of the practice. They also explained the ongoing persecution in China and asked for support to end it.

A Chinese international student took several photos of the Falun Dafa club booth using his cell phone, and said: “I will tell my family members in China that people can practice Falun Gong freely in America.” Later, three Chinese girls came by and used umbrellas to cover their faces while looking at the booth. A practitioner then told them that Falun Dafa is legal and welcome in America and they do not need to be afraid. They listened to the practitioner’s explanation and accepted truth-clarification materials. After a while, a group of Chinese international students came, and they told the practitioners: “We were checking Falun Dafa websites in China using special software which can bypass internet blockade. Do you have Nine Commentaries on the Communist Party?” After they received the booklets, they could not wait to read them.

An Asian-American student from the east coast had come here for a tour. He said that he had been to many big cities where he saw Falun Gong parades several times. He also did some research online. He asked: “Is Falun Gong a religion? Why would the Communist Party persecute them if they just practice the exercises together and why would they harvest organs from practitioners?” A practitioner answered all his questions, and he eventually understood the situation. He said that he would find a practice site in his hometown to learn more.

A Thai staff member of the university came to the booth and took an interest in the music “Pu Du” which was being played. She asked: “The music is so beautiful, and I have been looking for a pure organization. I want to join, how much do you charge?” When she learned that the club is free of charge, she was very surprised and said that she would come to learn the exercises at the practice site.