You are here: Home / Events / 2019 DC Rally to End Persecution of Falun Gong in China 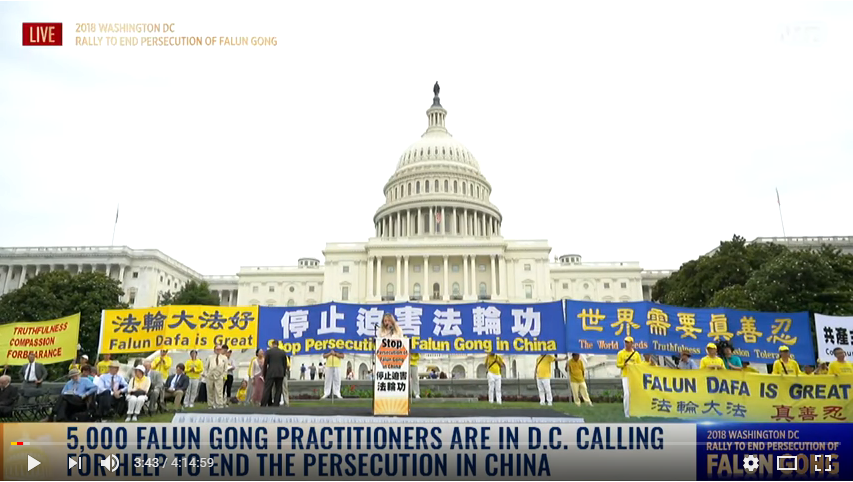 On 2019-7-18, Falun Gong practitioners from around the world, gathered in Washington D.C. for the annual rally and parade to protest against China’s persecution of Falun Gong.

Numerous U.S. congressmen and representatives from organizations advocating for human rights or religious freedom spoke at the event to lend their support.  Here is NTD’s  the coverage of this grand event streamed live on July 18, 2019:


The persecution of Falun Gong began on July 20, 1999, when then head of the Chinese communist regime, Jiang Zemin, gave the order. For 19 years, millions of practitioners have suffered from illegal abduction, imprisonment, torture, and even became victims of organ harvesting. Countless practitioners lost their homes, jobs, and were forced to leave their schools.

The CCP’s brutal persecution of Falun Gong practitioners is the repression of “Truthfulness, Compassion, Forbearance”—universal values shared by humankind. Communism is not only plaguing China, it is finding ways to rise from the ashes of the fall of the Eastern Bloc, since it was never eradicated in the West. Through various means, Communism is infiltrating our society on numerous fronts. By undermining traditional values and corrupting society’s understanding of right and wrong, it aims to create conflict and destroy morality.

This year, Falun Gong’s anti-persecution assembly in Washington D.C. calls for the world to put an end to the Chinese communist regime’s persecution of human rights and awakens people to Communism’s deadly impact on the world.

Here is a short version of event summary: