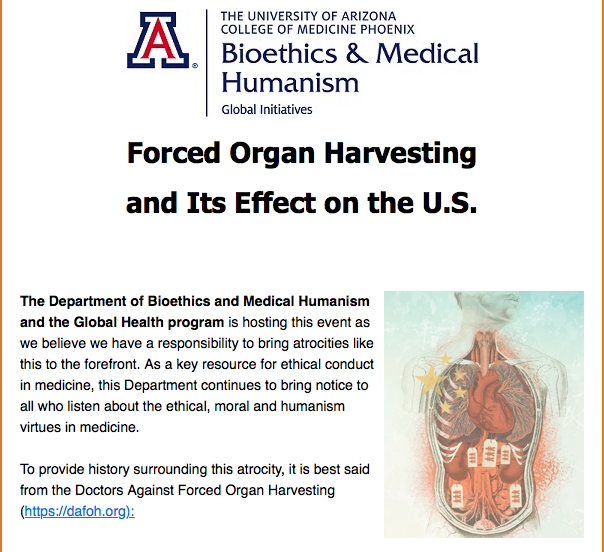 The event was held at the Virginia G. Piper Auditorium in Phoenix, Arizona. David Beyda, MD, chair of the college’s Department of Bioethics and Medical Humanism, moderated the discussion with the doctors from DAFOH, a nonprofit organization that promotes ethics in medicine.

The organization Doctors Against Forced Organ Harvesting (DAFOH) and the University of Arizona College of Medicine collaborated to host a panel of experts on April 19, 2019 to discuss the crime of forced organ harvesting happening in China and its effects on the United States.

G. Weldon Gilcrease, MD, deputy director of DAFOH and a director and assistant professor of oncology at the University of Utah School of Medicine, said: “Prior to 1999, [the] number of liver transplantations taking place in China was about 15 to 20 per year as an entire country, because there is a culture code within China that you take your body into [the] next life, so your organs must stay intact. Therefore, the donation rate is extremely low.”

However, after 1999, there was an explosion in the number of organ transplants in China, Gilcrease said.

In 2011, Beijing Red Cross reported that there were only 37 voluntary donors over the last 20 years in China.

The evidence has led them to the conclusion that an estimated 60,000 to 100,000 organ transplants occurred per year beginning in 2000, and that the majority of the organs were harvested from prisoners of conscience, most of whom were practitioners of the spiritual discipline Falun Gong.

The evidence from the investigations suggests that the organ procurement is on demand; that is, whenever someone needs an organ transplant in China, a matching “donor” is killed.

A documentary titled “Human Harvest,” released in 2014, is based on investigative work by Matas and Kilgour.

DAFOH’s website states: “With a small number of freely donated organs and a constant number of executions per year, the unexplained gap between supply and demand raises the question: Where do all the organs come from?”

Torsten Trey, MD, PhD, the executive director of DAFOH, stated that 70 million to 100 million Chinese people were practicing Falun Gong by the time the persecution started, according to data from the Chinese Communist Party.

Gilcrease mentioned that Falun Gong is an ancient Chinese spiritual discipline based on the principles of truthfulness, compassion, and forbearance. It was introduced to the public in China in 1992.

The Party began to illegally persecute it in 1999 because its spiritual values contradicted the atheist agenda of the Party. The Party launched a nationwide campaign of harassment, imprisonment, and torture against Falun Gong practitioners, and ordered that if any practitioner died from torture, it could be officially counted as a “suicide.”

The resolution expressed concern about “persistent and credible reports of systematic, state-sanctioned organ harvesting from non-consenting prisoners of conscience in the People’s Republic of China, including from large numbers of Falun Gong practitioners and members of other religious and ethnic minority groups.”

According to Trey, the Korean media TV Chosun used a hidden camera to capture systematic transplant tourism activities in the Tianjin Hospital in China. The filmmakers pretended that they wanted to purchase a kidney for a relative. The nurse from Tianjin Hospital said, “It just takes two hours to bring fresh organs.”

On December 12, 2009, the World Organization to Investigate the Persecution of Falun Gong (WOIPFG) released part of the testimony provided by an armed guard in Jinzhou City in China’s Liaoning Province, who had witnessed an organ extraction operation conducted on a live Falun Gong practitioner.

Gilcrease said the practice of forced organ harvesting is systematic and is carried out at the government level. He also added that American physicians and members of the public are at risk of complicity. Chinese surgeons in transplant medicine are trained by American medical institutions and then return to China to participate in unethical organ procurement and transplant practices.